Here in Utah there is lots to do- there are mountains covered in snow, red rock, rivers, lakes and cities all filled with different activities for everyone to enjoy. One thing we don't have much of is professional sport teams, there are two to be exact. Real Salt Lake, which is our Major League Soccer (MLS) team and of course the Utah Jazz. Both of these franchises have given us much to cheer about! Real Salt Lake won the 2009 MLS cup against the coveted LA Galaxy (David Beckham's team) and the Utah Jazz lost in the playoff finals against Michael Jordan and the Chicago Bulls in 1997. Here in Utah we love our Jazz and cheer them on no matter what the circumstance may be.

The 2010-2011 season was a rough and emotional one for Jazz players and fans. After losing head coach of 23 years, Jerry Sloan, in the middle of the season the Jazz took a turn for the worst, losing star guard Deron Williams and having an extra rough end to the season. Hopefully this season will be different!

With the end of the NBA lockout the Utah Jazz had a fresh start. Showcasing many new, young and talented faces on the team, it was a different site for Jazz fans, but it has turned out to be a good one. Gaining momentum and team chemistry the Jazz are on a 5 game winning streak (6-3). The Jazz are off to their best start at home (5-0) since beginning the 2008-09 season at 6-0. This only the beginning of what will hopefully be a successful and refreshing season. 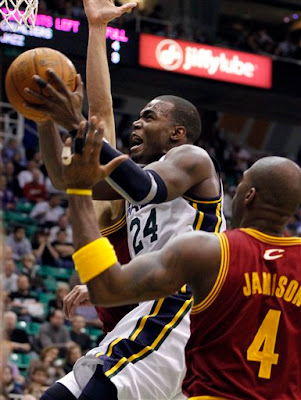 Email ThisBlogThis!Share to TwitterShare to FacebookShare to Pinterest
Labels: Around the Office, Events, IDS, Just Because, Micellaneous