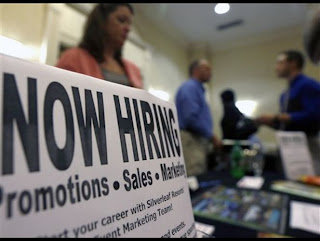 WASHINGTON (AP)—U.S. employers added 171,000 jobs in October, and hiring was stronger in August and September than first thought. The solid job growth showed that the economy is strengthening slowly but consistently.

The unemployment rate rose to 7.9 percent from 7.8 percent in September, mainly because more people began looking for work. The government uses a separate survey to calculate the unemployement rate, and it counts people without jobs as unemployed only if they’re looking for one.

Friday’s report was the last major snapshot of the economy before Tuesday’s elections. It’s unclear what political effect the report might have. By now, all but a few voters have made up their minds, particularly about the economy, analysts say.

Since July, the economy has created an average of 173,000 jobs a month. That’s up from 67,000 a month from April through June. Still, President Barack Obama will face voters with the highest unemployment rate of any incumbent since Franklin Roosevelt.

The work force—the number of people either working or looking for work—rose by 578,000 in October. And 410,000 more people said they were employed.

The influx of people seeking jobs “could be a sign that people are starting to see better job prospects and so should be read as another positive aspect to the report,” said Julia Coronado, an economist at BNP Paribas.

Investors were pleased by the news. The Dow Jones industrial average futures were flat before it came out at 8:30am EDT. When stock trading began an hour later, the Dow was up about 50 points.
The yield on the benchmark 10-year U.S. Treasury note climbed to 1.77 percent, a sign that investors were moving money out of bonds and into stocks.

The government revised its data to show that 84,000 more jobs were added in August and September than previously estimated. The jobs gains in October were widespread across industries. And the percentage of Americans working or looking for work rose for the second straight month.

The economy has added jobs for 25 straight months. There are now 580,000 more than when Obama took office.

But there were also signs of the economy’s persistent weakness. Average hourly pay dipped a penny to $23.58. In the past year, pay has risen just 1.6 percent. That has trailed inflation, which rose 2 percent.

The number of unemployed increased 170,000 to 12.3 million, pushing up the unemployment rate.

The October jobs report was compiled before Superstorm Sandy struck the East Coast earlier this week and devastated many businesses.

Professional services such as architects and computer systems providers also added jobs. So did retailers, hotels and restaurants, and education and health care. Government overall shed 13,000 jobs, after three months of gains.

The economy has shown many signs of picking up a bit in recent weeks. Americans are buying more high-cost items, like cars and appliance. Auto companies reported steady sales gains last month despite losing three days of business to the storm in heavily populated areas of the Northeast.

Yet businesses remain nervous about the economy’s future course. Many are concerned that Congress will fail to reach a budget deal before January. If lawmakers can’t strike an agreement, sharp tax increases and spending cuts will take effect next year and possibly trigger another recession.

American companies are also nervous about the economic outlook overseas. Europe’s financial crisis has pushed much of that region into recession and cut into U.S. exports and corporate profits.

(Copyright 2012 The Associated Press. All rights reserved. This material may not be published, broadcast, rewritten or redistributed.)
Posted by IDS, Inc at 9:06 AM