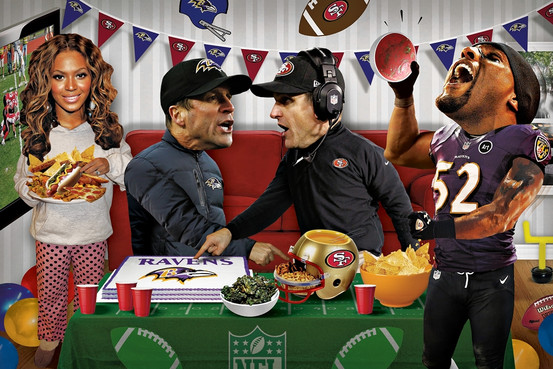 Super Bowl 2013 is full of great storylines and fun facts. Sure, the Harbaugh brother definitely make a great story. It is, after ll, the very first time two brothers, as head coaches, have faced each other in a Super Bowl. But that's not the only reason why this Super Bowl is so interesting to talk about.

There are many other cool storylines and facts about this upcoming Super Bowl. For instance, the evolution and rise of Colin Kaepernick and the fact that this will be Ray Lewis's last game makes this Super Bowl even more interesting.

But while these are all fun to talk about, one can't help but wonder what will really determine the outcome of the Super Bowl even more interesting.

But while these are all fun to talk about, one can't help but wonder what will really determine the outcome of the Super Bowl. In other words, do all the storylines and fun facts have anything to do with the outcome of this game?

It is the outcome of the game that we are all most interested in, isn't it?

5. There's Been Some Unnecessary Drama
One irrelevant fact about Super Bowl 2013 is that there has been an unnecessary amount of drama surrounding some of the players on both teams. First, there's Ray Lewis's drama, and I'm not talking about his retirement here.

David Epstein and George Dohrmann from Sports Illustrated have accused Lewis of taking banned substances to help out with his torn triceps injury. Perhaps the most interesting part of this story is that the substance is supposed to be some sort of deer-antler spray.

Lewis denies taking any sort of banned substance and whether or not this leads to further investigation is a pointless inquiry; Lewis is done playing for the NFL after the Super Bowl.

4. The Ravens Have Had Two Weeks to Figure out the Pistol Offense
Unlike the prior slide, this next fact is actually a little more football- related. One of the most interesting aspects of the 49ers's game plan is their use of the pistol offense. Atlanta couldn't stop it; neither could the Packers. Are we really under the impression that an extra week will help the Ravens figure out how to stop the pistol/read-option?

The 49ers offense under Kaepernick is almost unpredictable. Against Green Bay, Laepernick ran for over 180 yards. But against Atlanta- Where former 49ers head coach Mike Nolan now coaches are the defensive coordinator- the Falcons had no idea how to stop Kaepernick's pass attack in the second half of the NFC Championship. Kaepernick threw it deep and over the middle to pick up huge chunk of yardage. And it wasn't Kaepernick that ran the ball; it was Frank Gore and LaMichael James.

3. Ray Lewis's Last Football Game
Some might argue that Ray Lewis will be quite the difference maker in this Super Bowl. But if we are talking about his ability to make plays, then I completely disagree.

Let's get real here. Do we really think that Lewis himself will be able to stop Kaepernick and this pistol offense? There's reason why athletes retire. It's because they're getting old and tired and can't play like they were once able use to. Lewis knows this. He knows that he's not as fast as he once was. Lewis knows that he might struggle chasing down Kaepernick and bringing him down.

The only influence Lewis will have on this game is his ability to inspire and motivate his teammates. The Ravens will play well because they're a good football team with a great coach.

2. John Harbaugh Has Already Beat Jim Harbaugh
There are some significant differences between the first time these brothers met and this upcoming Super Bowl game. For one thing, we're talking about the Super Bowl, not a regular-season game. Secondly, we can't possibly think that history repeats itself every time two teams play each other. If that were true, then the Ravens would be favorites in this game. But they're not.

This team now doesn't look anything like the Niners that won five Super Bowls. There's no talk about a West Coast offense. There's no Joe Montana, Bill Walsh, Jerry Rice or Steve Young. Those guys are gone. In fact, it's been 18 years since the 49ers won a Super Bowl. The Niners team is completely different than the '80s and '90s 49ers. The pistol offense is what we associate with 49ers now. Colin Kaepernick is the quarterback and Frank Gore is the all-time leading rusher in franchise history. And the head coach is now Jim Harbaugh.

With Super Bowl XLVII right around the corner, final predictions are being made for every aspect of the season's biggest game. That includes which players are most likely to win Super Bowl MVP.

That player will join the winners from the other 46 Super Bowls and forever be remembered for his perfomance. The only question that will remain is where will Super Bowl XLVII MVP's performance rank among every other MVP winner?

While the big game hasn't taken place yet, we've still taken the time to rank every Super Bowl MVP. We've ranked them based on actual performance during the game, taking into account clutch and significant plays.

Let use know how you like to celebrate the Super Bowl. Include your favorite game day traditions, snacks, meals and drinks.
Posted by IDS, Inc at 11:55 AM